After Bicep files are created, most likely we will want to use them to deploy our resources to Azure in some way. Obviously, this is the main reason why Bicep files and ARM templates exist.

The best way to deploy infrastructure code (Bicep files and ARM templates) is through CI/CD pipeline. In this post, we will look how to achieve that with Azure DevOps Pipelines.

In general, managing cloud resources by following Infrastructure as Code approach is the right way to go. This makes our infrastructure consistent, automated, and easier to manage in the long run.

Infrastructure code should be stored in a source control system (e.g. Git) and deployed in a similar way to the application code, additionally, any infrastructure changes should be peer-reviewed before being applied in production.

As you might have guessed, Azure Bicep along with Azure Pipelines are the tools that allow implementing the Infrastructure as Code concepts in Azure, this is what we are going to discuss in this post. Of course, you can use other tools instead of Azure Pipelines if you wish :-).

We will cover different variations of deploying Bicep files in Azure Pipelines, for example: using YAML and Classic pipelines, using Azure CLI or ARM Template Deployment task, passing parameters with or without a parameter file.

Let’s first come up with a sample Bicep file which will be used in all our examples. It doesn’t matter which resources we choose to deploy in the template, that’s why we only have a simple storage account.

Below is our main.bicep file, please note that we have two parameters:

In addition to the main template, here is our small main.parameters.json file where we pass storageAccountName parameter.

Great, so now we have main.bicep and main.parameters.json files which we want to deploy through a YAML pipeline. There are a few ways to do that in Azure Pipelines, we will talk about Azure CLI and ARM template deployment task in this section.

Luckily, Azure CLI versions 2.20.0 and later already contain Bicep, this means that when using Azure CLI we can pass Bicep files right away and they will be compiled into ARM templates without any involvement from our side.

I wanted to show both shorter and longer versions of the pipeline code that you might have when deploying Bicep files.

Minimal pipeline just shows one step to deploy a template, on the other hand, Full Pipeline is closer to how your code might look like in production when you create an artifact and have multiple stages.

NOTE: In the snippets below, Bash is used for Azure CLI examples, however, you could use PowerShell Core there as well (not important), in this case escaping line breaks would be with a backtick, not backslash.

The pipeline below contains only one step - Azure CLI task which deploys our template. Usually, your pipeline would be more complicated, but this snippet nicely illustrates the main idea.

Even though the previous minimal example works, it is unlikely that your production pipeline will look like this. Most likely, you’ll come up with something similar to the following example.

The main difference here is that it creates an artifact first and later consumes it to deploy the templates. Besides Bicep files, an artifact usually contains code of your application, for example, binaries and configuration files.

A standard way to deploy ARM templates in Azure Pipelines is to use “ARM template deployment” task. The problem is that at the time of the writing (July 2021) this task doesn’t support Bicep yet and only accepts ARM template JSON files.

However, this could be easily solved by adding a step where Bicep files are compiled into ARM templates, and we can use Azure CLI for this.

The idea in Classic Pipelines is the same, the only difference is the user interface, here we will use UI instead of YAML to author the pipeline. Also, some features differ between YAML and Classic experiences, but it is not relevant for this post.

This section will consist of two parts:

The build pipeline is very similar to the Build stage in Full Pipeline, but here we use Classic UI experience to add and configure steps.

Our build pipeline consist of the following steps/tasks:

The animated image below shows how the steps look like.

While the Build pipeline lives in the same place as YAML pipelines (Pipelines → Pipelines), Classic UI Releases are located in a different place (Pipelines → Releases).

We will not go into the details of creating a release pipeline, but instead will see tasks for deploying templates with Azure CLI or ARM Template Deployment task. For more information about release pipeline, please refer to the documentation.

On a high level, our release pipeline consists of these two parts:

As with YAML Pipeline, we will cover deployment with both Azure CLI and ARM Template Deployment Task, they are represented as two separate tasks inside of the “Deploy” stage (but do the same thing). 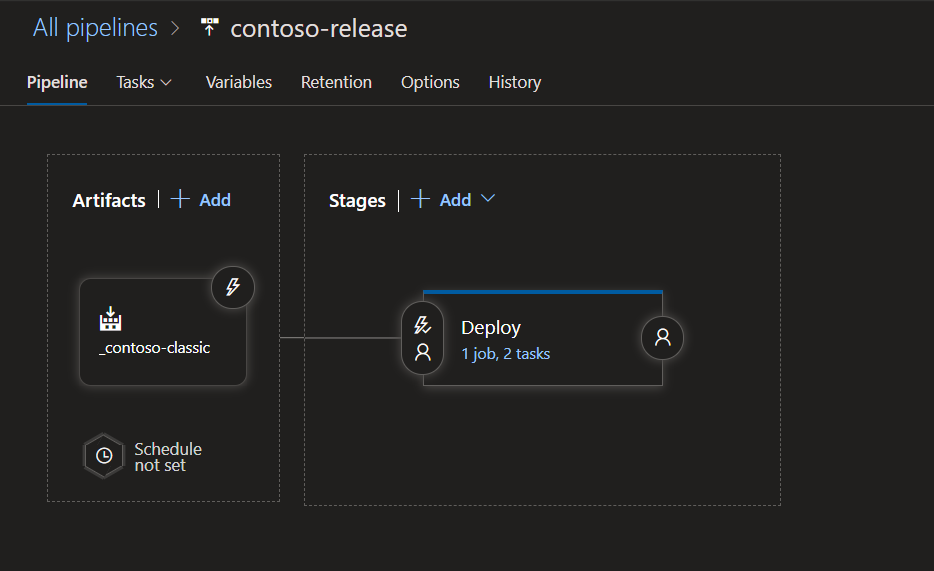 As we already know from previous sections, Azure CLI can be used to deploy Bicep templates. Again, the idea is the same as with YAML pipeline, but the user experience is different.

In the task configuration we just need to select ARM connection, specify script type, and add the script itself. 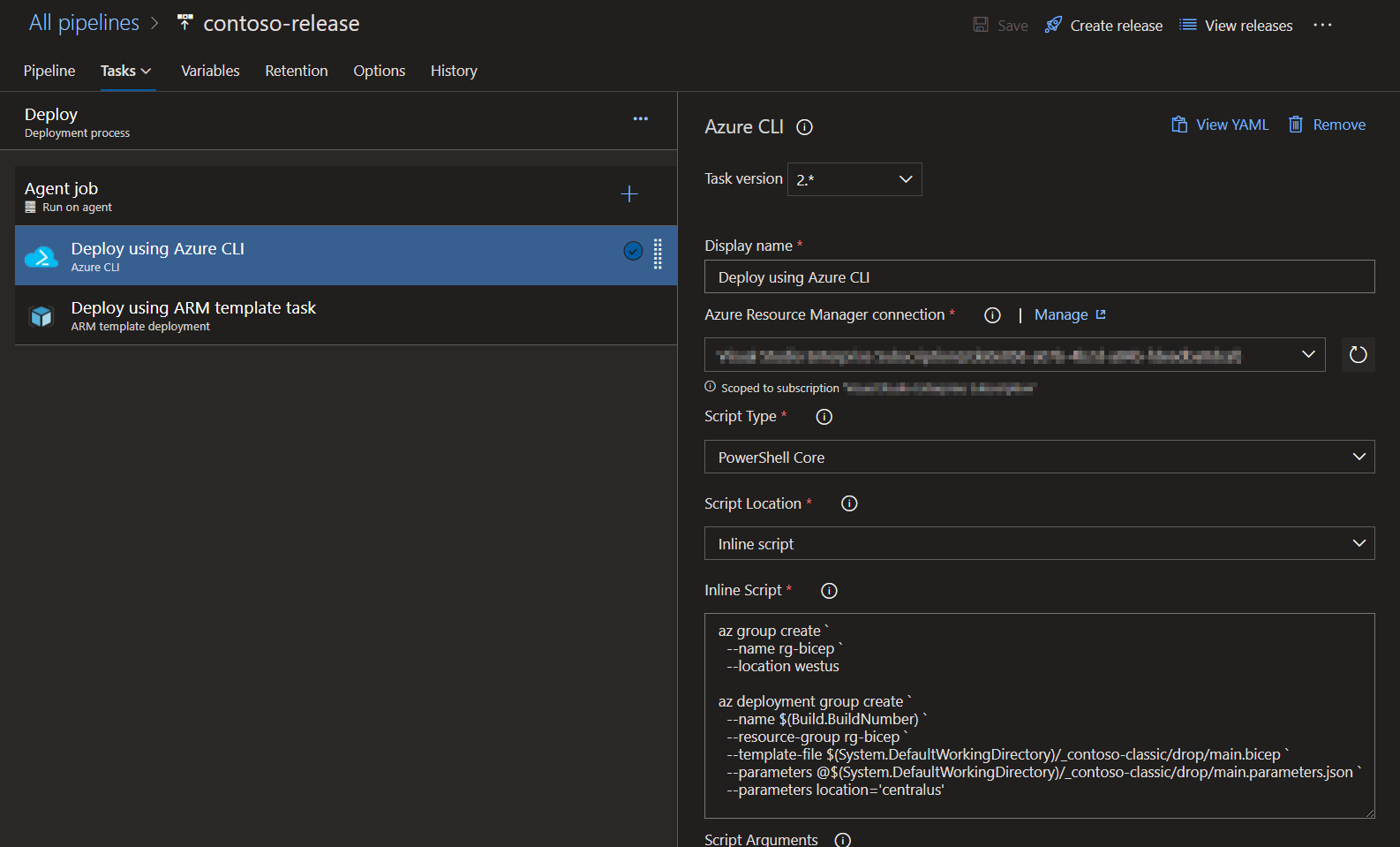 Using ARM template deployment task in Classic Release is very simple, just a couple of things to pay attention to:

The image below shows the template configuration of the ARM task, note that Azure connection details are minimized to save space. 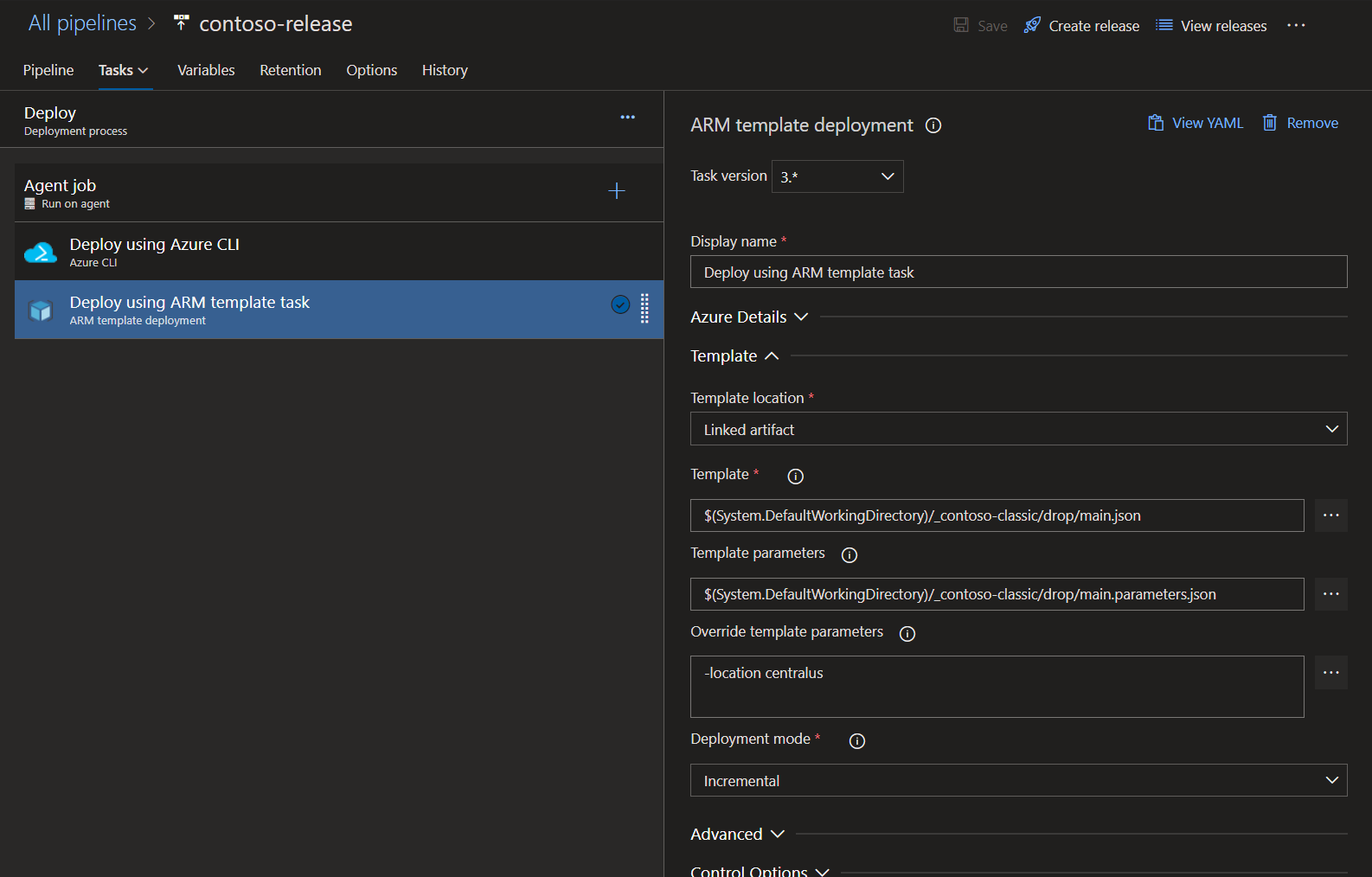